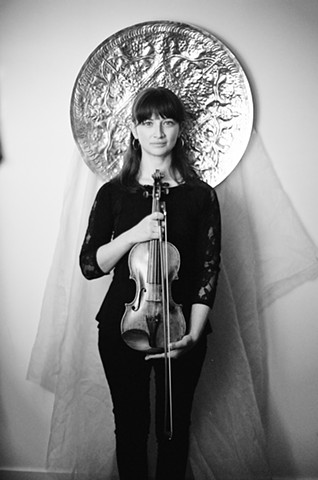 Violinist Laura Reid is a versatile and active member of Calgary's music and arts community. Having established a place in Calgary's Classical scene and with eight years playing as a member of the Calgary Philharmonic Orchestra and countless performances and collaborative work with small ensembles in the city, she left her tenured position with the CPO in 2016 to pursue a wider range of artistic opportunities. She was appointed Artistic Director of Kensington Sinfonia in 2018, leading and programming the 9-piece string ensemble for both their main series of chamber music and their series at Village Brewery that pairs the ensemble with a non-Classical featured artist.

LR(Willey)standing.jpg Her musical efforts continue to explore and expand beyond standard Classical repertoire: she is heard regularly at experimental/improv series Bug Incision, has a performance/ recording project Osmanthus with electronic musician Kris Sujata (Valiska), and performs as violinist and vocalist with harp-pop project Hermitess. Laura can be heard as part of many recorded projects: film scores Empyrean and Circle of Steel, albums by Cam Penner, AM Static, Emily Triggs, Rachel Fannan, Ethan Cole, Jesse, and the Dandelions.

PinkPartybigsmile.jpg Not confined to performance pursuits, Laura hosted the weekly radio show Unprocessed on CJSW 90.9 FM (winner of the National Community Radio Association’s award for Best Classical Programming in 2018) for four years until January 2020, a project she started with pianist/composer Mark Limacher, and she was a part of the City of Calgary public art project cREative realm, producing a six-part podcast fantasy audio tour in 2017. She enjoys working with young musicians, having worked with students at Amici String Program, University of Calgary, Western Canada High School, and Mount Royal University.