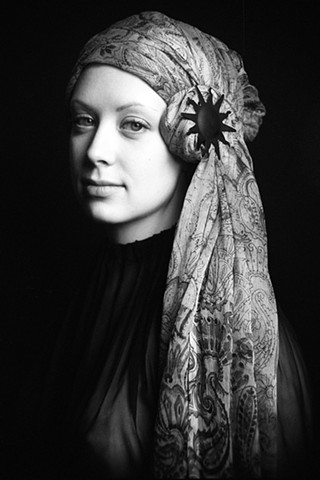 This image was inspired after reading about the life of Kiki de Montparnasse : Alice Prin:: An enigmatical woman that influenced culture in Paris during the 20's and 30's. She was known as the "Queen of Montparnasse. She was a model, a muse and lover of many famous artists, but also a singer, dancer, cabaret manager, painter and film actress. Animating and enchanting the Montparnasse district during the interwar Wars (1921-1939). She influenced many surrealists and filmmakers, poets and novelists. I believe she challenged a male dominant art scene at that time. Influencing the likes of Francis Picabia, Jean Cocteau, Man Ray, Picasso, Dali, Ernest Hemingway, Tsuguharu Foujita- to name a few.

After reading about her incredible life I decided to create a timeless portrait in her honour as an influential woman in Paris, but also as a woman that inspired artists to create more art and literature.

The headpiece took me an hour to construct- the woman I chose was a friend that reminded me of Kiki. She had a likeness to her in many ways, so I asked her to sit for me for this portrait.